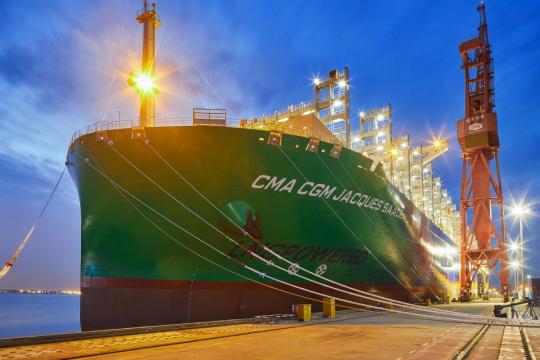 “The vessel represents the highest standard in shipbuilding and future trends, and since the signing of the contract, it has received great attention globally. The successful delivery of the ship proves that Chinese shipbuilders have completed the transition from manufacturing to innovation,” said Chen Jianliang, chairman of Hudong-Zhonghua Shipbuilding.

Jean-Baptiste Boutillier, vice-president of CMA Ships, termed it as “great innovation”. According to Boutillier, the group has worked on the project for more than a decade along with its major partners.

The LNG-powered container ship is 399.9 meters long, 61.3 meters wide, and has a deck spanning 23,978 square meters, equivalent to three and a half standard football pitches. The ship is 60 meters longer than the world’s largest aircraft carrier.

Unique because of its 18,600-cubic meter LNG tank, the vessel is capable of traveling 37,040 kilometers, sufficient for making round–trip voyage between Asia and Northern Europe routes where it will be deployed starting Wednesday, according to experts. The structure has an internal stainless steel coating that can resist extreme temperatures of -163 C, when gas can be liquefied for convenient storage and transport.

Yuan Hongliang, a chief technology expert who specializes in container ships with Hudong-Zhonghua Shipbuilding, said that in addition to the LNG tank, the vessel is equipped with a smaller fuel tank and a gasoline tank as substitute options for special conditions.

Hu said that due to the changing environmental requirements for shipping, LNG-powered vessels may soon be the norm for a growing number of ship operators.

A naming ceremony was held simultaneously in Shanghai and Marseille in France on Tuesday. The vessel has been named the Jacques Saade, after the group’s founder.